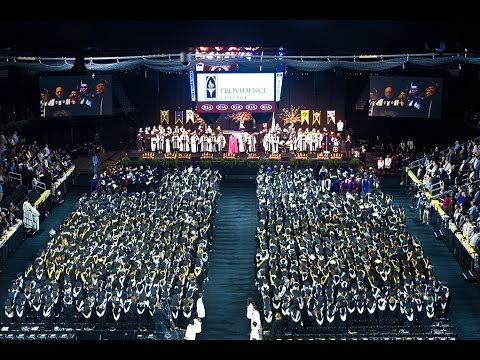 The love of all things Providence reverberated in the remarks of commencement speaker Dr. Roy Peter Clark ’70, who used his life’s circumstances to remind Providence College graduates that setbacks frequently turn into opportunities.

The scholar regarded as “America’s writing coach” enthralled the Class of 2017, their families, and members and friends of the College community with an inspirational and music-punctuated address that highlighted the Ninety-ninth Commencement Exercises at the Dunkin’ Donuts Center in Providence on Sunday, May 21.

The College presented 1,159 diplomas, including 938 bachelor’s degrees to full-time undergraduates; 184 degrees to graduate students in education, history, mathematics, theology, and business administration; 31 to students in the School of Continuing Education; and six honorary degrees.

Senior scholar at The Poynter Institute school for journalism in St. Petersburg, Fla., Clark wove segments and anecdotes of his PC education and life experiences into an address filled with nostalgia, humor, sensitivity, and candor. His message of trusting in providence and moving beyond disappointments connected with the assembly, who gave him a thunderous ovation at its conclusion — with Clark perched at a keyboard that was set up on the dais.

“If you think of your life as the evening sky, you will look up now and see individual stars, representing the key moments of your existence so far,” said Clark. “I promise you that one night, sometime in the future, you will look up and see not just a bunch of stars, but a constellation, a narrative with a broader scope and a deeper meaning.”

His own experiences, particularly in the ability to rebound from adversity, helped him come to this “broader” realization, implied Clark. He cited several examples, including being rebuffed by Ivy League schools, settling for a job that wasn’t in “a big news media capital,” and failing to win a Rhodes Scholarship — though being the first in PC history to be nominated for one. Each time, he made the most of alternative opportunities, including attending PC, where he was a member of the Liberal Arts Honors Program, graduated summa cum laude as an English major, and gave the class oration at commencement.

Clark, whose address referenced many family and friends who have influenced him — such as his wife, Karen, and PC roommates Bob Donovan ’70, Fred Day ’70, and Bob Frederick ’70 — said a chalkboard message written by his eighth-grade teacher and Franciscan brother, Richard McCann, has remained his “catechism” in life. McCann wrote: “God is the author of our lives, but He writes straight with crooked lines.”

Clark said, “I will say it again. ‘God writes straight with crooked lines.’ There is a word for that that isn’t there. It’s on the tip of my tongue. And it’s on the front of my hat. And it will be on your diplomas for the rest of your lives. “Providence … Providence … Providence,” he said in conclusion, before walking to the keyboard and playing “Twist and Shout.” As Clark began playing and singing, the Class of 2017 and entire audience stood and sang along, erupting in a thunderous cheer as he finished.

As Commencement Exercises began, the procession of graduates was led by the class valedictorians, who share the distinction of highest in academic rank: Lauren Berolini ’17 (Bridgewater, Mass.), a history and secondary education major; Jack Ricci ’17 (Providence, R.I.), a pre-engineering major; and Victoria Timmel ’17 (Smithtown, N.Y.), a biology and psychology double major.

Class members were congratulated by numerous speakers, including College President Rev. Brian J. Shanley, O.P. ’80. Saying we live in a time of “alternative truths and facts,” he reminded graduates to persevere and live a life in which truth is paramount. Their Development of Western Civilization coursework exposed them to the emergence of skepticism and relativity in ancient Greek thought as well as to the “robust theories of truth” espoused by Socrates, Plato, and Aristotle, he pointed out. Father Shanley offered two reasons for students “to love and live in the truth.” One was the example of Thomas Aquinas, who in 1270 responded firmly to a disputation regarding the strength and meaning of truth. Aquinas proclaimed that truth “effects the deepest change in the human person. If you live in the truth, you will be constantly changing for the better,” he said.

The second aspect Father Shanley urged students to consider is from the Gospel of St. John and is written on the exterior of the Ruane Center for the Humanities on campus: “You will know the truth and the truth will make you free.” Living in falsehood “is a form of self-imposed delusional servitude,” whereas one who lives in truth can act freely, he said.

The class was welcomed to the alumni family by Mary Pat L. Caputo ’79, president of the National Alumni Association Council. Caputo reminded graduates that their ties to the College become stronger at commencement, when they join an alumni network of 55,000 people.

“‘Providence College family’ also takes on a deep meaning for my family, and our PC legacy is very special to us,” said Caputo. “I attended PC with five members of my family all together here years ago, and my daughter, Sarah, graduated in 2012. Last May, our family celebrated the graduation of our eighth ‘family Friar’ at my niece’s commencement.”

In her remarks to her classmates,Gretchen Barrett ’17 (North Weymouth, Mass.), senior class president, reflected briefly on the class’ collective academic accomplishments but also emphasized the many “newfound families” that formed the last four years. Barrett also expressed appreciation on behalf of the class to the “other families” behind the graduates —“the ones who let us attend PC.”

Barrett said that, although there is not one story that can sum up the graduates’ four-year experience adequately, she is confident that “each of us is heading off to something amazing.”

The invocation was given by Most Rev. Robert C. Evans, D.D., auxiliary bishop of Providence. The benediction and presenting of the graduates was by Rev. Peter Martyr Yungwirth, O.P., College chaplain.

Very Rev. Kenneth R. Letoile, O.P. ’70, chairman of the Providence College Corporation and prior provincial of the Dominican Province of St. Joseph, assisted in conferring the honorary degrees.

At the Academic Awards Ceremony, held in the Peterson Recreation Center on Saturday morning, Timmel presented the class oration on behalf of all three top scholars.

Dr. Christopher Arroyo, associate professor of philosophy, presented greetings from the faculty. Arroyo is the recipient of the 2016-17 Joseph R. Accinno Faculty Teaching Award, presented to the faculty member who best exhibits excellence in teaching, passion and enthusiasm for learning, and genuine concern for students’ academic and personal growth.

The Commencement Mass and Service of Investiture was held on Saturday afternoon in Peterson Recreation Center with Father Shanley as the principal celebrant and homilist. The deacon was Deacon Patrick Moynihan ’99G & ’12Hon., president of The Haitian Project and father of Timothy Moynihan ’18.

Music for the Mass was provided by the combined liturgical choirs, directed by Mark Colozzi, director of liturgical music, and by Concert Chorale and I Cantori, directed by Dr. Todd J. Harper, associate professor of music and director of choral activities. Maldonado was cantor. Grace Hartl ’17 (Albany, N.Y.) played flute and Juliette Latendresse ’17 (Mapleville, R.I.) played oboe and conducted the combined choirs for the closing song.

The guest speaker was U.S. Army Lt. Gen. (Ret.) Richard P. Formica, who was commissioned through PC’s ROTC Program while a student at Bryant University. After a 36-year military career with service in Iraq and Afghanistan, he was inducted into the inaugural class of the ROTC Hall of Fame in Fort Knox, Ky. He is the brother of John R. Formica, Jr. ’81.