John Chan ’74 is the most interesting Chan in the world

At Chan’s Fine Oriental Dining, the eggrolls are light and crispy, the teriyaki tender, the chicken fingers golden. But it isn’t just the tasty food that fills the seats. At Chan’s, the jazz is cool and the blues are hot — that’s the combination that draws the crowds to Woonsocket.

John Chan ’74 stands inside his restaurant, part concert hall and part art museum, surrounded by framed portraits and posters. So many famous people have passed through the doors at Chan’s in the last 40 years to play music, or to listen to it, that the walls can hardly contain their signed photographs: Dizzy Gillespie, Leon Redbone, Livingston Taylor, Aztec Two-Step, Shemekia Copeland, Ana Popovic, Rocco Baldelli.

Chan was inducted into the Rhode Island Music Hall of Fame in 2018 for his support of jazz and blues musicians, and for his help in launching the international careers of such Rhode Island performers as Scott Hamilton, Roomful of Blues, Duke Robillard, and Greg Abate. He also is a painter and photographer who golfs with movie directors Peter Farrelly ’79 and Bobby Farrelly. Ask him about comedian George Carlin, who came to dinner at Chan’s.

It’s an incongruous mix: jazz and blues in a Chinese restaurant in an old mill city known for its French-Canadian heritage. Even from the outside, Chan’s surprises. The building pops against the gray landscape of Main Street. Its brick façade is accented in yellow, purple, and teal and is topped with a roof of rounded, green tiles. Just beyond the hand-carved, rosewood door, which Chan’s parents imported from China, is a case housing three statues, the Chinese good luck symbols for happiness, prosperity, and longevity — all of which have been enjoyed by Chan’s.

Portraits of Chan’s parents look down from the walls: Ben F. Chan, who died in 1980 at age 64, and, Ethel, known as “Mama Chan,” who died in 2017. John, who studied business management at Providence College, is aware that the freedom to pursue his artistic passions was won by the sacrifices of his father.

Ben Chan came to the United States at age 12, went to college to earn a degree in electrical engineering, and began a career with General Electric in Chicago. After World War II, he sailed to China to find a wife in his village in Canton. He was supposed to remain in China to work for GE, but civil war and the rise of communism intervened. He moved to Hong Kong and launched a business importing X-ray machines and air conditioners. That’s where John was born, along with his brother, Bill, now a Cumberland dentist, and his sister, Linda, who lives in California.

When the Korean conflict led to a trade embargo, Ben, with $100 in his pocket, returned to the United States to work as a waiter, and later a buyer, for the House of Chan restaurant at 57th and 7th in New York City, opposite the Americana Hotel. The restaurant was owned by a cousin. Once established, he sent for his family. John was 10 and spoke no English when he moved to Astoria, Queens. His father never worked in electronics again.

In 1965, another cousin retired to Hawaii and offered Ben the opportunity to buy his Chinese restaurant, The New Shanghai, a fixture on Main Street in Woonsocket since 1905. John Chan has an old newspaper clipping with an advertisement for the restaurant, its menu in French. The Chans relocated and pitched in to keep the restaurant going. In 1974, they renovated and added their name to the business.

“I worked from the back of the house to the front of the house,” from dishwasher to cook to server, Chan said. “Woonsocket was a nice community, a blue-collar, working town. My family was well accepted.”

After high school, Chan enrolled at the University of Maine but found the weather colder than he liked, so he transferred to PC, where he was introduced to jazz music. He lived off campus with basketball player Nehru King ’73 and Joseph Small ’74, who had a music show on radio station WDOM. Chan can still remember the double album they played that caught his attention: Blues Summit by Duke Ellington, with Johnny Hodges.

“Wow, this is pretty nice stuff,” he thought.

Chan accompanied his roommates to Joe’s Upstairs, a restaurant on Fountain Street in Providence that featured live bands, to hear Hamilton Bates and the Blue Flames. After, he asked his father: Might live music work in Woonsocket? Ben, who grew up in the Big Band era, was willing to give it a try.

In 1977, jazz vocalist Jean McKenna O’Donnell, the sister of jazz pianist Dave McKenna ’82Hon., became the first artist to perform at Chan’s. She still performs there, as her brother did for many years, often accompanied by trumpet player Dick Johnson. Back then, musicians played in the dining room. Chan points out the spotlight, still in the ceiling.

“It took a long, long time to get people to drive north of Providence to hear music,” Chan said. “The consistency of quality music” finally won out, he said.

Ron Della Chiesa, host of the Music America program on WGBH radio in Boston, helped by regularly plugging performances at Chan’s. He coined the slogan, “Home of eggrolls, jazz, and blues,” and became a friend, as did most of the performers who appeared at Chan’s and the regulars who came to hear the music.

Chan’s dining room is a feast for the eyes. The ceiling is made of stamped teak tiles. The walls are decorated with acrylic paintings of performers — Duke Ellington, Taj Mahal, Tommy Dorsey, Miles Davis, Ella Fitzgerald, Ray Charles, Reverend Gary Davis, John Hammond — painted by George Frayne. Frayne performed in the 1970s as Commander Cody and His Lost Planet Airmen (“Hot Rod Lincoln”) and holds an MFA from the University of Michigan. Chan’s is the largest collection of Frayne’s paintings in the country.

When a Fleet Bank branch in the building closed in 1984, Chan saw an opportunity to expand and turned the space into the Four Seasons Room, which seats 125 and is available for wedding receptions and business meetings. Chan retained the bank vault. He is proud of the room’s acoustics. During shows, he listens and records. He estimates he has an archive of more than 3,000 performances recorded live at Chan’s.

In 2011, USA Today named Chan’s among the “10 Great Places to Savor Chinese Food” and particularly cited the chow mein sandwich — noodles on two slices of white bread smothered with a gravy made of onions and celery. It was “a mill-town specialty,” Chan once said: “hot, fast, inexpensive, and filling — everything a working man wants.”

Through the years, Chan added catering, take-out, delivery, and a drive-up window. He employs about 25 full- and part-timers, including five chefs. He adapts the menu to changing tastes.

“Older people like the traditional chow mein, chop suey, and fried rice. Younger palettes are looking for spice, more flavor,” Chan said. “Food is the main attraction at Chan’s and always has been. It’s one of the best Chinese restaurants in the state.”

Chan is an artist himself. He returned to PC after graduation to study photography with associate professor Richard Elkington, and he takes classes in drawing and painting at the Providence Art Club. His framed watercolors hang in his restaurant: Leon Redbone outside the RISD Museum on Benefit Street in Providence, Edgartown Harbor on Martha’s Vineyard, and downtown Woonsocket on a rainy evening.

Chan’s relationship with the Farrelly brothers began with their father, Robert Farrelly, M.D. ’52, a Cumberland physician who was a Leon Redbone fan. The Farrellys gave Chan an Oscar at the premiere of Stuck on You in 1983. It reads “Best Actor Cut From Movie.” Chan played a scene opposite Cher. While it wound up on the cutting-room floor, his speaking part was retained, so he receives royalties. He also had a cameo in Me, Myself, and Irene and played the owner of a Chinese restaurant in the final episode of the second season of Brotherhood, the Showtime series filmed in Providence.

Above the cash register, Chan keeps a Gold Record awarded to J. Geils in 1980 for “Love Stinks.” In 2011, Chan went to Memphis to receive the Keeping the Blues Alive Award from the Blues Foundation. He also received the William Blackstone Society Award from the Blackstone Valley Tourism Council and the Pell Award for Excellence in the Arts from Trinity Repertory Company.

Chan’s is open every day and as late as midnight on weekends. John Chan’s days off are Monday and Tuesday. As he gets older, he considers other pursuits. But there are no family members to take over Chan’s; his wife and son do not work in the business.

“Maybe find a buyer one day with the same interests and keep the music going,” Chan said.

“My life has been continuously influenced by both the visual and performing arts — cooking, photography, painting, and enjoying live performances at Chan’s Fine Oriental Dining. Rhode Island has been good to the Chan family. We’re grateful for the support and friendship.” 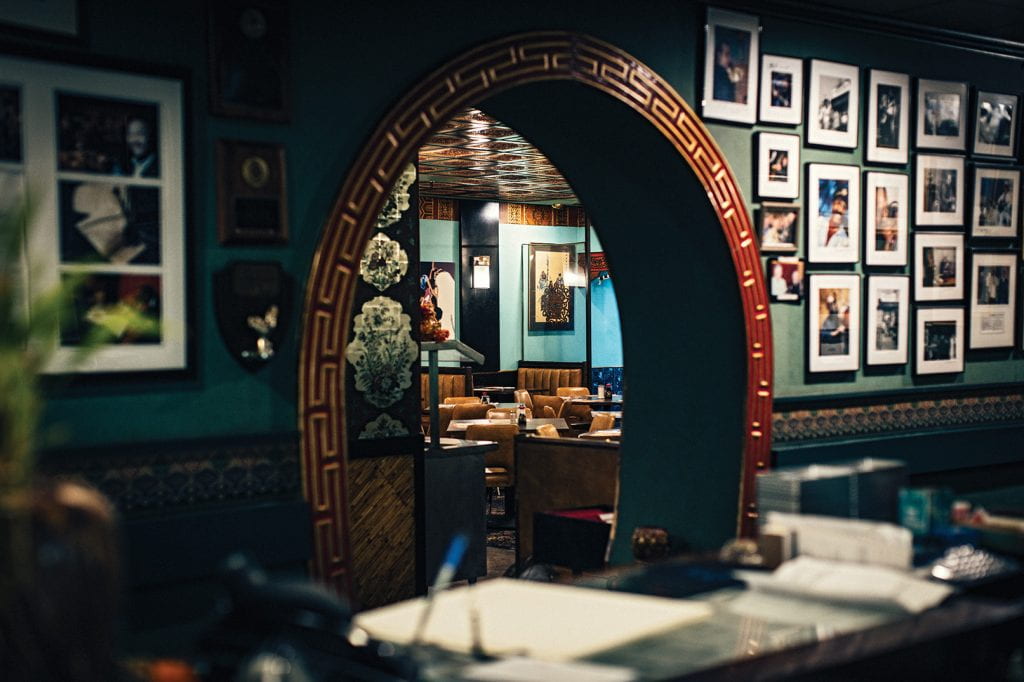 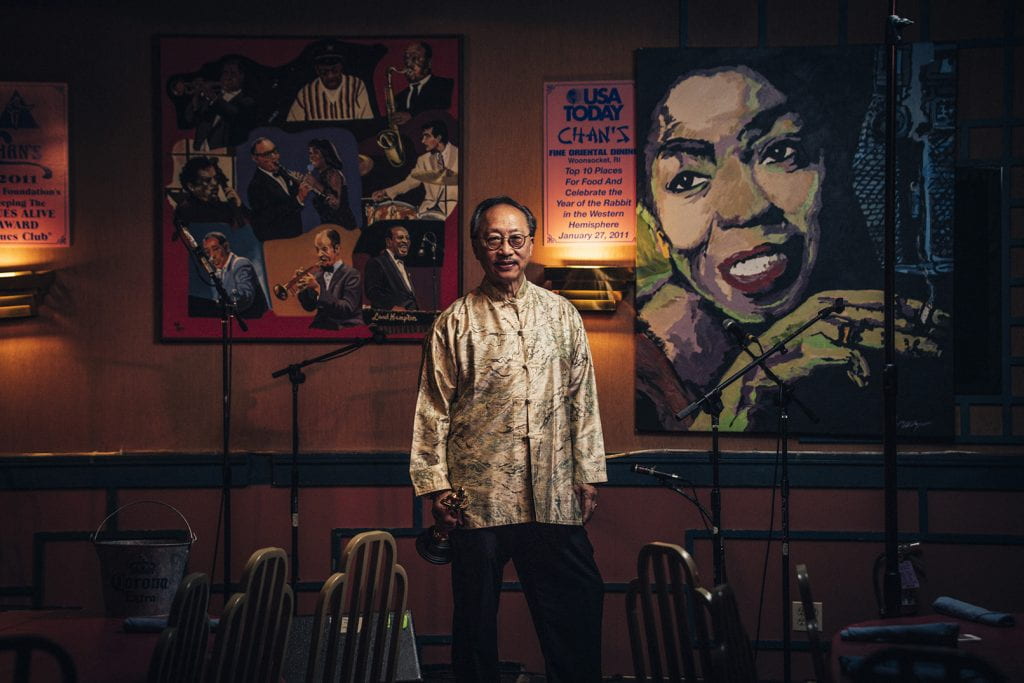 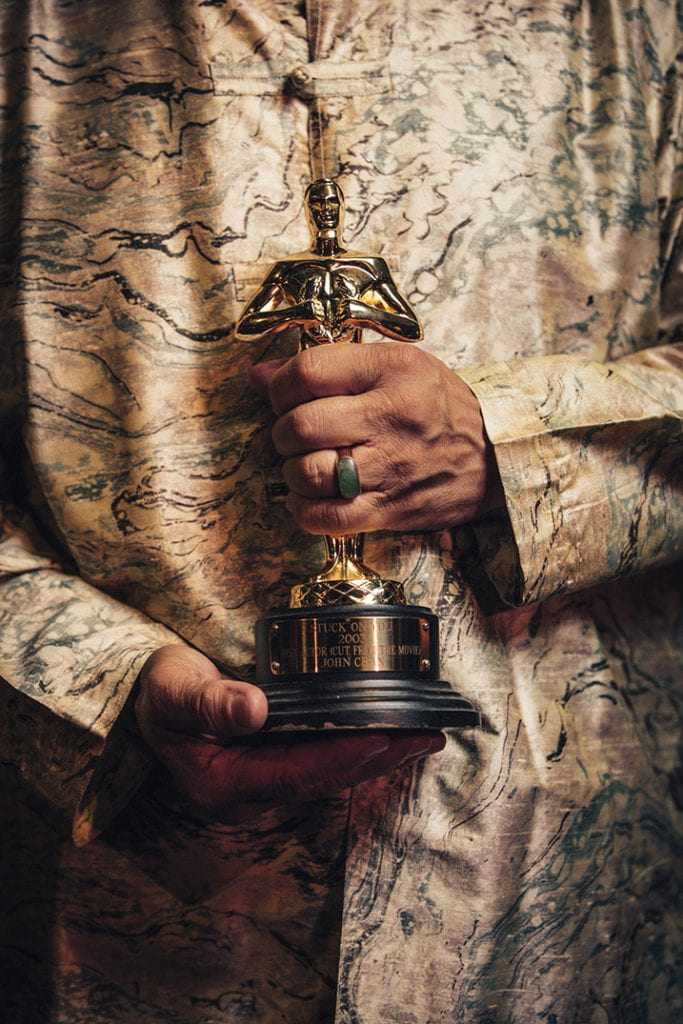 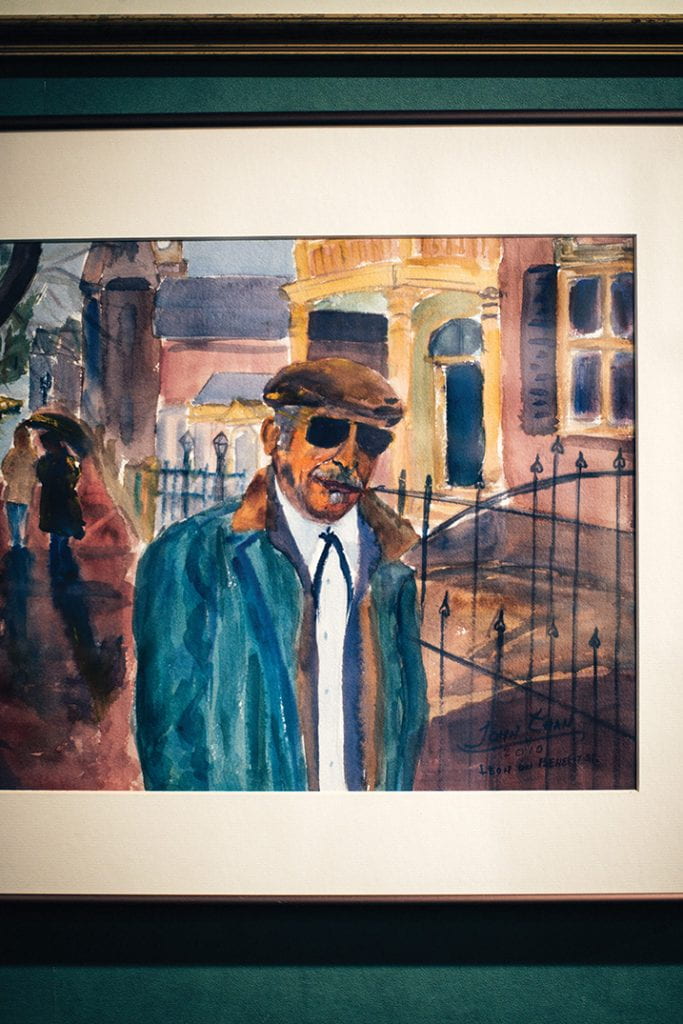 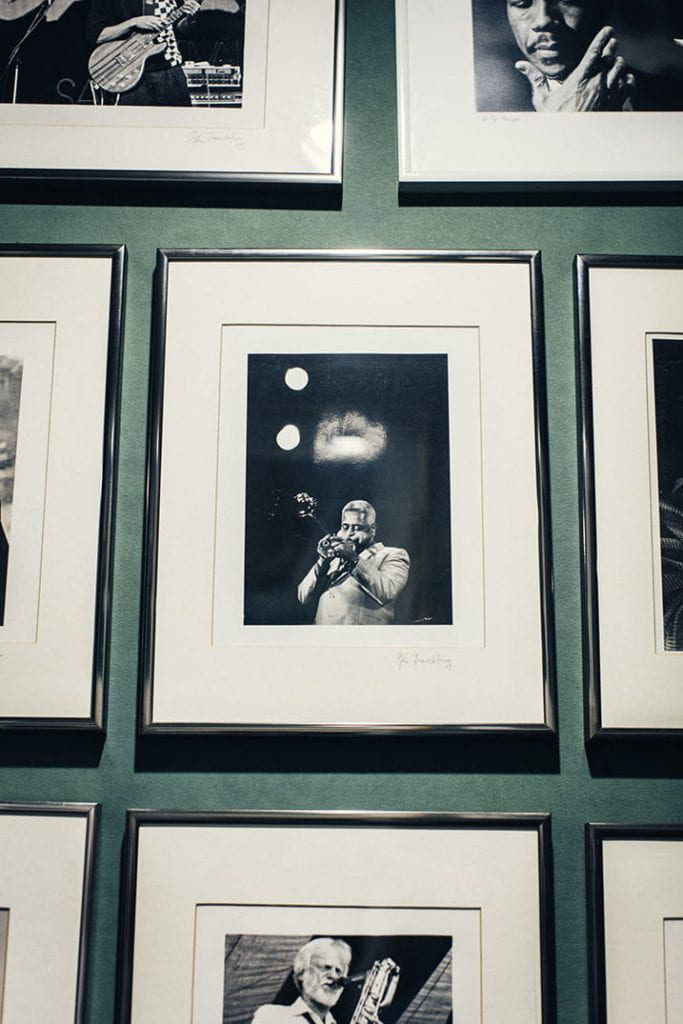 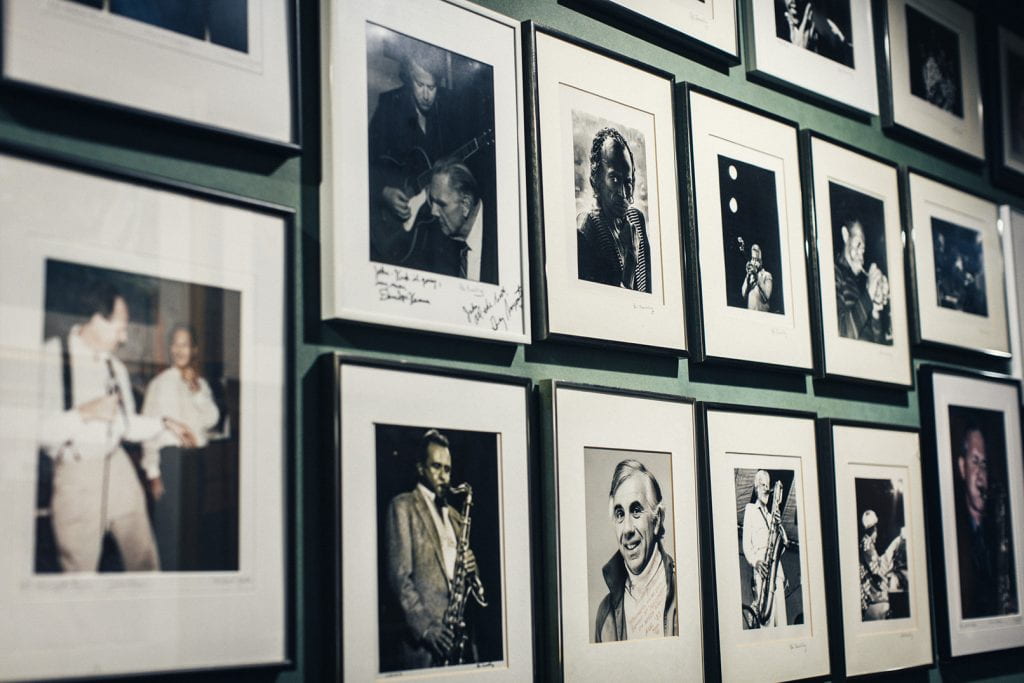 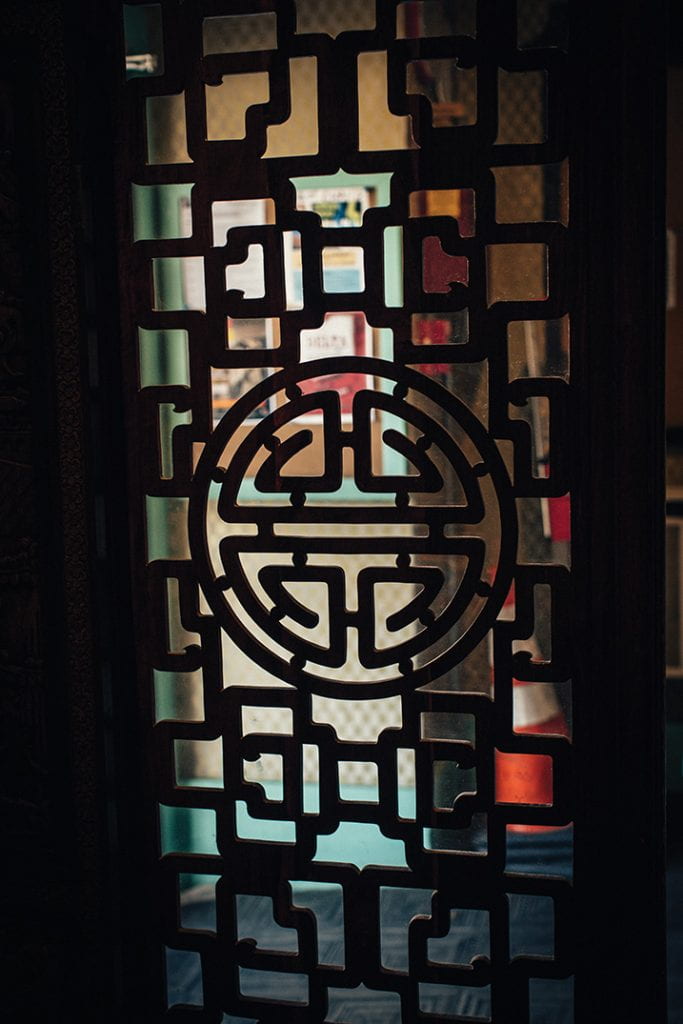 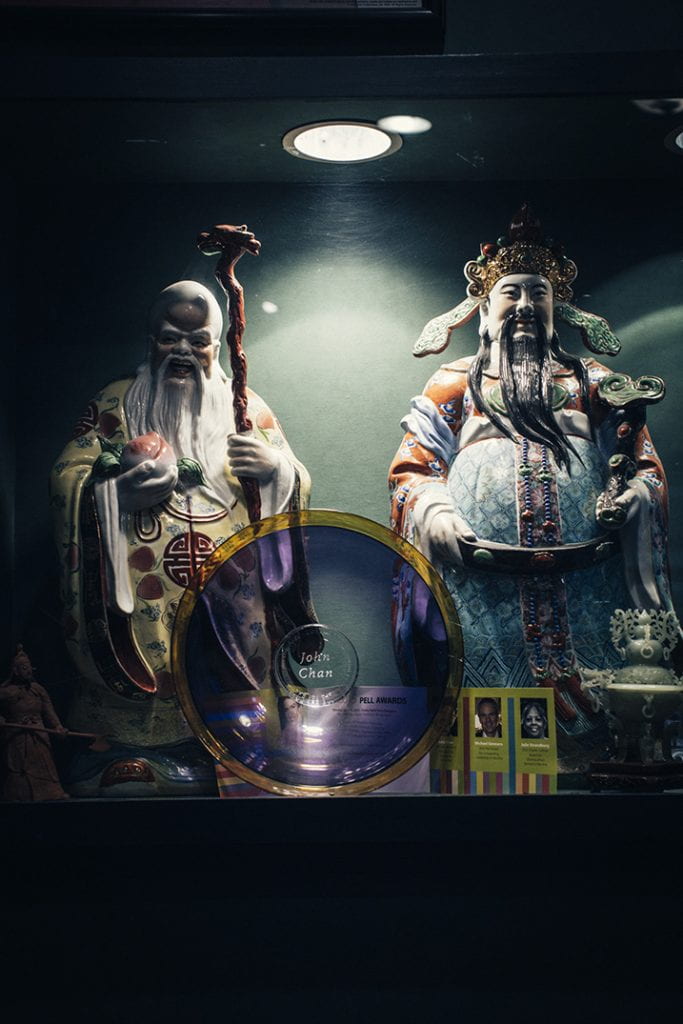 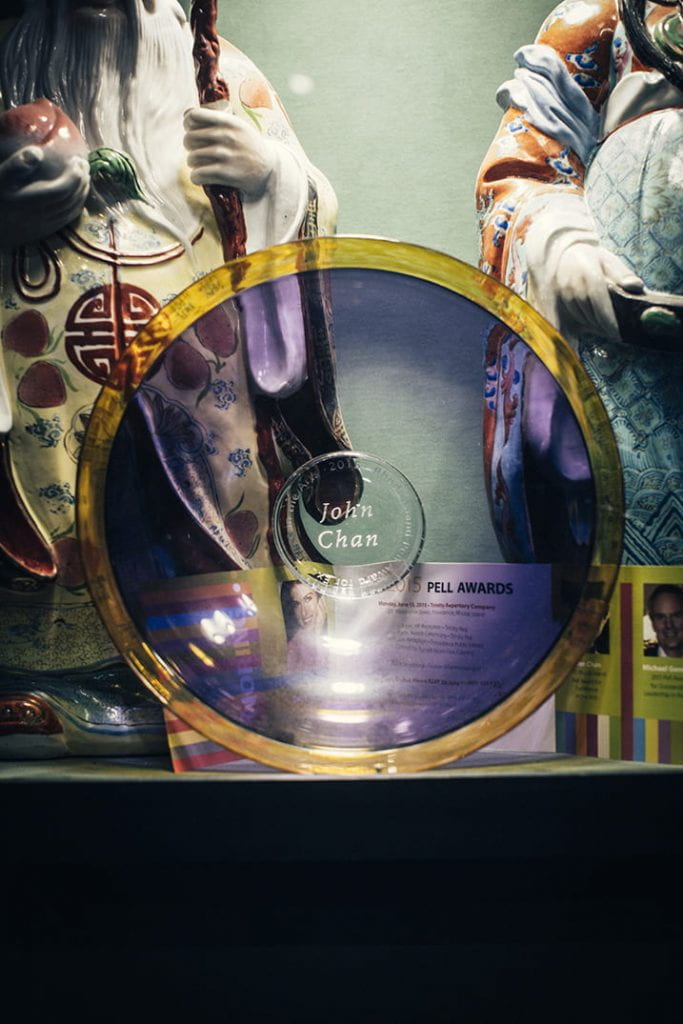 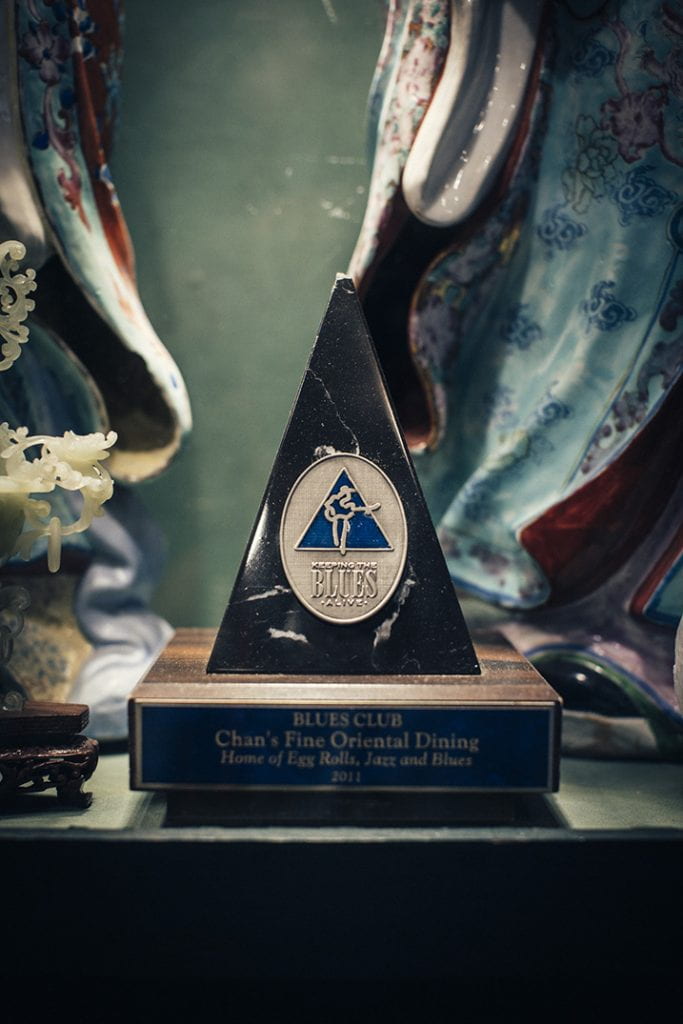 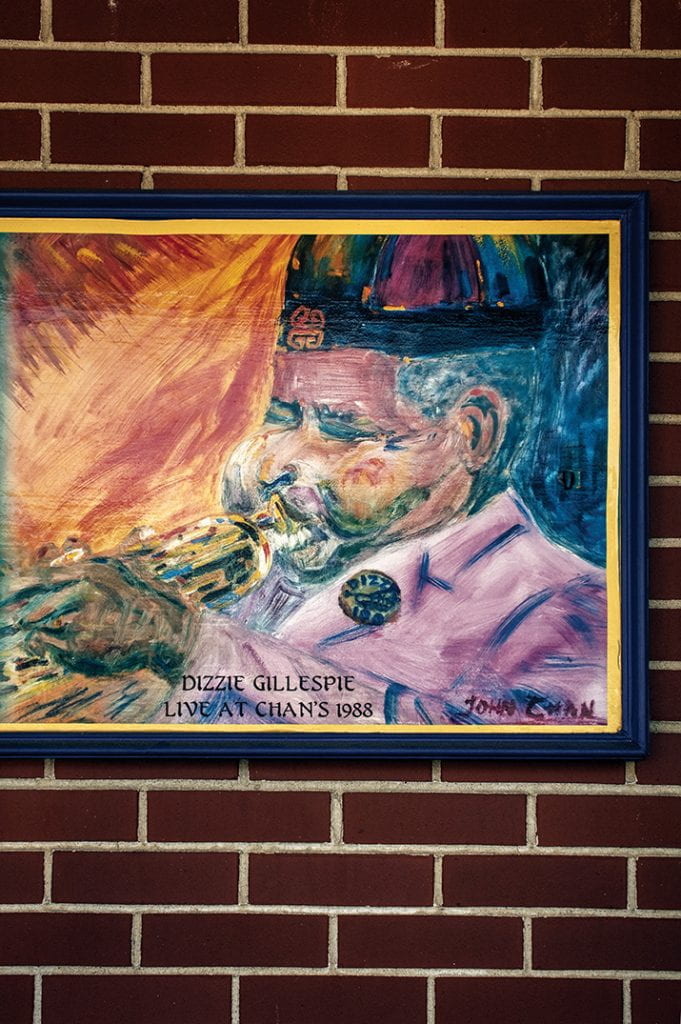 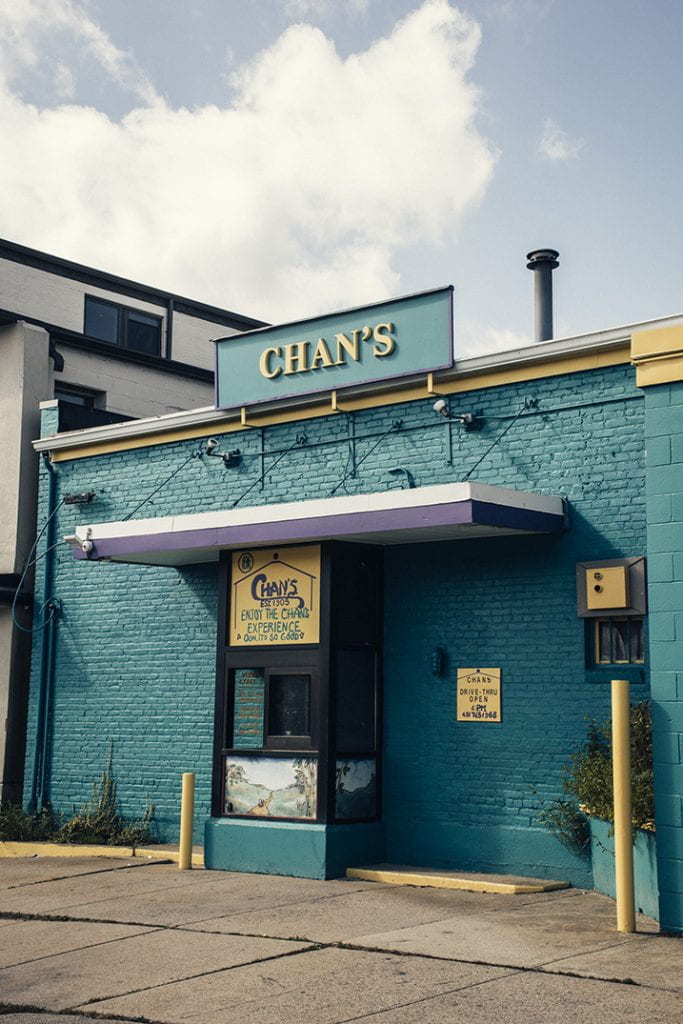