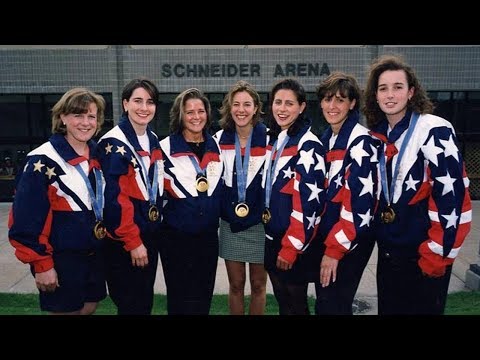 Twenty years after they captured the first and only Olympic gold medal for the United States in women’s ice hockey, four Friars reunited at Providence College as honored guests at Alumni & Family Weekend, Feb. 9-11.

Lisa Brown-Miller ’88, Vicki Movsessian ’94, Sara DeCosta-Hayes ’00, and Laurie Baker ’00 were teammates in Nagano, Japan, when women’s ice hockey debuted as an Olympic sport in 1998 and the United States won gold. Three other Friars were members of that 20-player squad, including Cammi Granato ’93 & ’12Hon., Chris Bailey ’94, and Alana Blahoski ’96.

Granato sent a video greeting that was played on Saturday morning in Peterson Recreation Center, just before Bob Deraney, women’s ice hockey coach at PC since 1999, facilitated a discussion with Brown-Miller, Movsessian, and DeCosta-Hayes.

“The start of the Olympics is an exciting time,” said Granato, the team captain, who in 2010 became one of the first women inducted into the Hockey Hall of Fame. “It’s so fun to watch the opening ceremonies and remember what that felt like. Every time there’s an Olympics, I get super-emotional. … We went in as underdogs and pulled together as a team. It all went perfectly for us. We really were the pioneers. It’s a bond we’ll have forever.”

The audience in Peterson was also treated to a video showing highlights from the team’s victory against Canada in the final round.

“Although it was 20 years ago that we won, watching videos like that gives me goosebumps and brings tears to my eyes,” said Brown-Miller, who traveled to PC from her home in Michigan. “It’s like you can step right back into that moment with just a 30-second clip.”

At 31, Brown-Miller was one of the oldest members of the Olympic team. When she was growing up near Detroit, there were few opportunities to play women’s hockey. She decided to attend PC without being certain she could make the team. She credited the coach, John Marchetti ’71, with creating a family atmosphere that welcomed her.

“He sharpened our skates. He would do the laundry for us. He left candy in our hockey skates,” said Brown-Miller. Coming to PC “was one of the best decisions of my life,” she said.

When Brown-Miller graduated in 1988, there wasn’t even a women’s national team — it wasn’t established until 1990.

“I thought I was done (playing hockey) in 1988, and then another door opened,” Brown-Miller said. “Just as doors were opening, I was able to step through. I had some teammates who were on the other side, and they were just a step shy of getting through that door. So, I feel very fortunate.”

Movsessian, by contrast, had “tons of opportunities to play hockey with boys and girls” while growing up in Massachusetts. In 2003, she founded the Massachusetts Spitfires, a youth hockey league for girls. Six years later, with three daughters of her own, she convinced DeCosta-Hayes, who also has a daughter, to launch a similar program for girls in Rhode Island. The Rhode Island Sting uses Schneider Arena at PC as its home base.

“We see the current (PC) women’s team, the skills they have, and the talent, and the role models (they are for) our Rhode Island Sting girls every day,” said DeCosta-Hayes. “It’s an amazing experience to be there with our daughters and to be able to teach them the sport we love, and to be able to do it with my teammate and one of my best friends.”

When Movsessian arrived at PC in 1990, the foundation of women’s hockey was already in place, but “I wasn’t a scholarship athlete,” she said “I had loans. I had to do well academically. We didn’t know about the Olympic games. We were playing because we loved it and to get a good education. … To be remembered (now), because we remember our time here, is really amazing.”

DeCosta-Hayes, a goalie, never played hockey with girls, or had a goalie coach, until she came to PC. She was recruited by Bailey, who later became her Olympic teammate.

“It was the best decision I ever made,” said DeCosta-Hayes. “The hockey, the academics — it was everything I dreamed it would be.”

At the Olympics, Brown-Miller kept a notebook of her experiences. The team’s success “came down to chemistry,” she said. “It was by far the best team I’ve played on, the most selfless, the epitome of team. There was no one person who would make or break us. Everybody had a role to fill.”

It was not surprising that Friars made up more than a third of the players — “it’s that common bond of a Catholic school education, belief in something bigger, and striving through troubled times,” said Movsessian.

“It’s hard to find 20 people who can maintain respect for each other as teammates,” said Movsessian. “That’s what we did at the moment. We were 20 players who wanted so badly to do well for each other and collectively win. We would do anything for each other, on the bench, in the village, while playing, or not playing, or getting picked.”

Women’s hockey was so new that the players didn’t realize at first that the world was paying attention, Movsessian said. IBM set up a “surf shack” with Yahoo email so the players could contact home, “but most of us had never used email, so we just emailed each other,” she said. “Then U.S. Hockey started filtering in commentary and emails from people around the world supporting us, and we realized this is so much bigger than us.”

“All I can tell you is what I saw when I looked into the stands — our mothers huddled together crying, our fathers high-fiving each other, hooting and hollering,” said DeCosta-Hayes. “Our siblings being chased by security because they were climbing over the glass to get onto the ice.”

As they lined up at the blue line and the National Anthem played, “we all just reached down and held onto each other tight,” said DeCosta-Hayes. “It was such an emotional time to be joined hand-in-hand with teammates. A moment you’ll never forget and that is hard to explain.”

The ice hockey players were feted at events throughout Alumni & Family Weekend. At a Winter Olympic Village set up in the Calabria Pavilion outside Schneider Arena on Saturday night, Brown-Miller, Movsessian, and DeCosta-Hayes were joined by teammate Baker. The event included an open skate, hot chocolate, an ice bar, and viewing of the Olympics on TV.

Adam Hanna ’18 (Lakeville, Mass.), a singer and songwriter, took the stage to perform during the night, along with student a capella, dance, and spoken word groups.

Academic panels, theatre performances, and athletic contests were held throughout the weekend.

Sixteen seniors who are first-generation college students participated in a celebration with their families and other members of the College community in Aquinas Lounge on Saturday morning as part of the College’s PC 1G initiative, sponsored by Division of Student Affairs and the Center for Orientation, Transitions & Leadership. Each student received a pin to wear at commencement in May.

During the men’s basketball game at the Dunkin’ Donuts Center in downtown Providence, Ralph Paparella ’40, who is believed to be the oldest former men’s basketball player, was honored at halftime. Paparella served in World War II as an aircraft identification instructor, teaching pilots how to identify enemy airplanes. He has been active in veterans affairs, including the Veterans of Foreign Wars and the Italian American World War Veterans of the United States. He will be 100 in June.