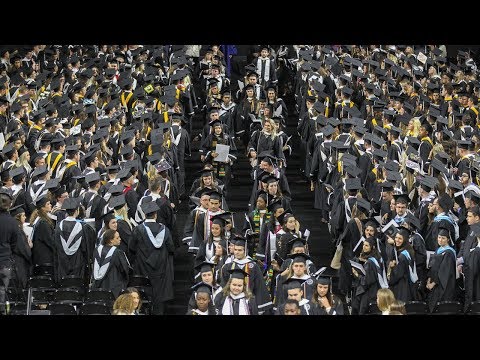 Serve as lighthouses to others, Pemberton exhorts graduates

Graduates were urged to be lighthouses — beacons of hope and direction for the community, for loved ones, and for those in need — by Steve Pemberton, author and human rights advocate, who was the featured speaker at Providence College’s One Hundred First Commencement Exercises on Sunday, May 19, 2019, at the Dunkin’ Donuts Center in downtown Providence.

Pemberton, chief human resources officer for Workhuman, a social recognition and performance management platform based in Framingham, Mass., was presented a doctor of public service degree as one of six honorary degree recipients. The College conferred 1,188 degrees, including 961 bachelor’s degrees to full-time undergraduate students; 202 master’s degrees in business administration, education, history, mathematics, and theology; and 19 degrees to students in the School of Continuing Education.

An honorary doctor of science degree was awarded posthumously to Dr. Stephen J. Mecca ’64 & ’66G, longtime professor of physics who encouraged students to join him in research projects to improve health, sanitation, and education around the globe. It was accepted by his children, Dr. Laura E. Ray, Lisa K. Sallee ’88, Stephen D. Mecca ’88, and Michael R. Mecca ’90 & ’92G.

College President Rev. Brian J. Shanley, O.P. ’80 introduced Pemberton as an instrumental role model who rose above challenges to become a light for others, especially those denied opportunity. He is a successful business executive, impactful philanthropist, and a motivator beyond compare, recognized for his diversity and inclusion efforts in the workplace and beyond, said Father Shanley.

Pemberton grew up in foster care in New Bedford, Mass. After his graduation from Boston College, he began research and discovered that his mother had died from addiction and that his father, an amateur boxer, had died as a victim of gun violence. His story was detailed in his book, A Chance in the World: An Orphan Boy, A Mysterious Past, and How He Found a Place Called Home (The History Press, 2012), which was made into a movie in 2018.

During his address, Pemberton mentioned his longtime friendship with Ed Cooley, the Friars’ men’s head basketball coach, which began when both worked at the University of Massachusetts in Dartmouth and at Boston College, Pemberton in admission and Cooley in basketball. (Cooley’s wife, Nurys Cooley ’19SCE, received a bachelor of arts degree from the School of Continuing Education at the ceremony.)

“The lives that we live today as husbands, fathers, community citizens, and leaders in our respective professions were the lives that we dreamed of back then,” said Pemberton. “If nothing else, our lives are proof and evidence to you that the whisper of a dream that lies in your heart today can actually, some day, one day, come to pass tomorrow.”

Both Cooley and Pemberton were changed by people “whose goodness bent the arc of our lives,” Pemberton said. For Cooley, it was Eddie and Gloria Searight, neighbors who took care of him in his youth. For Pemberton, it was John Sykes, a teacher at New Bedford High School, who took him in when he left an abusive foster home during high school.

Pemberton gave the graduates an assignment as their last professor, delivering their last lecture: “Let those who are your light know how important they are to you. Text them, call them … if they’re not here, pray to them. Your assignment is due today.”

Pemberton said he did not need to wish the graduates success, because their PC degrees made success for them more likely than not. Instead, he wished them something greater, fulfillment.

“I am not in a position to tell you what that actually looks like, in large part because I’m still trying to do that myself,” said Pemberton, who is a husband and a father to three teenagers. “The fulfilled life is always one in motion.”

After being named commencement speaker earlier this year, Pemberton spoke by telephone with a group of student leaders to ask what message they would like to hear. Before the commencement ceremony, he walked among the graduates and introduced himself, and he  mentioned several by name as “lighthouses” in his address.

“The lighthouse is a power structure in the sea. It needs no recognition. It seeks no reward. And though lighthouses are different sizes and colors … they are always illuminating the path to stability and safety,” Pemberton said. “There are 21 lighthouses along the Rhode Island coastline, and now that we have conferred your degree upon you, there are over 1,000 more, because the most powerful lighthouses in the world are the human ones.”

In his remarks to open the ceremony, Father Shanley discussed the philosopher Susan Wolf’s exploration of the central tension in ethics — how to reconcile the conflict between the natural human desire for happiness and fulfillment with the duty to respect and promote the good of others.

“In the end, Wolf suggests that love is the meaningful thread that weaves our lives together into a coherent whole,” Father Shanley said. “Love gives you reasons that move you to connect to you to the world and contribute to it.”

Mark E. McGwin III ’81, president of the National Alumni Association, congratulated the class on joining an alumni network that is 55,000 strong. There were 96 legacy students among the graduates, including 24 who shared a legacy with both parents. McGwin noted that his sister, Maureen Geller ’83, also is an alumnus.

“It is a day that the phrase ‘Providence College family’ takes on special significance,” said McGwin, remembering how supportive Friar alumni in the Boston area were when he reached out to network and develop business opportunities there. “As with the day that you first set foot as student at Providence College … you are ‘Forever a Friar.’”

Caroline Cook ’19 (Hingham, Mass.), president of the senior class and a marketing major, shared memories, including storming the court at the Dunkin’ Donuts Center when the Friars defeated top-ranked Villanova in men’s basketball during junior year.

“We have gone through Civ, eating in Ray, living in Aquinas, going abroad, and living off-campus together, things that make the PC community as strong as it is,” Cook said. “As we move into the next stage of our life, let’s take the sense of community that made us feel at home with us.”

Top-ranked student Paul LaFond ’19 (Bridgewater, Mass.), a quantitative economics major and mathematics minor, will enter a master’s degree program at the University of Chicago to study economics, with plans to pursue a Ph.D. after that. In the class oration, he discussed the distinction between academic success and education.

Education requires self-examination, LaFond said. A person must become “unnerved, unsettled, frustrated, and maybe even frightened, because education demands that you confront who you are as a person and how you choose to perceive the world.”

“Truth and goodness are not exclusive to the ancient world, no matter how much one may choose to romanticize the classics,” LaFond said. “Studying truth and fighting for goodness for yourself and your fellow human beings are not just classroom exercises, but a life’s work.”

Dr. Edward E. Andrews ’01, assistant professor of history, presented greetings from the faculty. Andrews is the 2018-19 recipient of the College’s highest teaching honor, the Joseph R. Accinno Faculty Teaching Award, presented to the faculty member who best exhibits excellence in teaching, passion and enthusiasm for learning, and genuine concern for students’ academic and personal growth.

Symphonic Winds performed at the ceremony. Bryan Sabbag ’19 (Norwood, Mass.) led the singing of the Alma Mater. The invocation was given by Allyse Gruslin, campus minister, and the benediction by Rev. Bonaventure Chapman, O.P., assistant College chaplain.

Commencement Mass and Service of Investiture

The Commencement Mass and Service of Investiture was celebrated on Saturday afternoon in the Begley Fieldhouse of the Peterson Recreation Center with Father Shanley as the principal celebrant and homilist.

Fifteen student leaders in academics, organizations, and athletics were invested at the Mass, including LaFond, the top-ranked student, and Cook, the class president.

Bergner, a political science major, will attend infantry officer training at Fort Benning, Ga., followed by active duty with the infantry. He was selected to give remarks on the behalf of the class during the ceremony. Cristiano, who majored in political science and minored in Spanish, will attend aviation officer training at Fort Rucker, Ala., followed by active duty in aviation.

The guest speaker was Army Brig. Gen. (Retired) Michael T. Byrnes ’67, a native of Bristol, R.I., who has a master’s degree in international relations from the University of New Hampshire, where he also taught. Byrnes studied Mandarin Chinese at the British Ministry of Defense Chinese Language School in Hong Kong and at Beijing University. He also served as a military liaison officer in Hong Kong and as the U.S. defense attaché to Beijing. In retirement, he has helped U.S. companies access the China market.